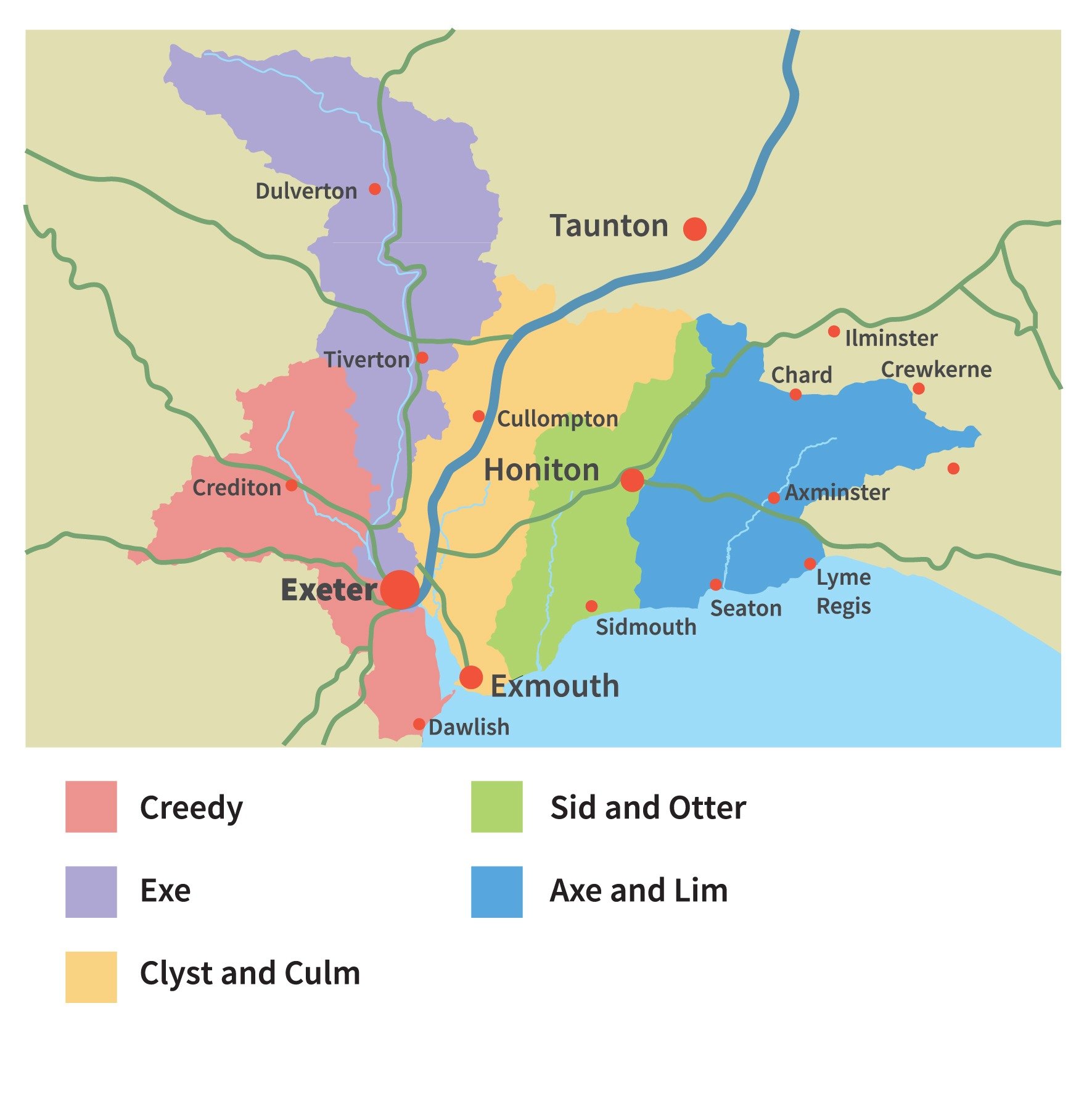 The East Devon catchment has a varied landscape and stretches from Exmoor and the Blackdown Hills in the north to Exmouth and the Jurassic coast and west Dorset.

Only 7% of the catchment is developed, compared to the national average of 16%. East Devon is predominantly agricultural, with lowland cattle and sheep farms constituting 38% of the farming practice. The population of the catchment includes the main urban areas of Exeter, Crediton, Tiverton and Cullompton. Exeter, the county town of Devon, has a population of 119,600.

The catchment contains one National Park and three Areas of Outstanding Natural Beauty (AONBs) covering 66% of the catchment.

There are 103 river water bodies in the catchment as well as 4 lakes, 4 estuaries, 10 groundwater bodies and coastal waters to the south.

Our water and rivers

Rivers, groundwater and coastal waters in East Devon are used for drinking water, recreation and they should also support healthy fisheries and wildlife.

There are a number of water problems affecting the Rivers Axe, Otter and Clyst mainly related to manures, slurry and soil entering the river.

There are also water quality problems related to sewage and runoff from urban areas. However, the pressure from manure and slurry from farming is greater.

The rivers Otter and Sid do not support a salmon population due to historical barriers affecting fish migration. The River Clyst is not a natural salmon river, however water quality is poor in this river affecting Water Framework Directive objectives to protect fish such as trout.

This short term pollution is caused when heavy rainfall washes faecal material into the sea from livestock, sewage and urban drainage via rivers. These waters have had warnings advising against swimming in recent years.

In 2009 30% of water bodies in the East Devon catchment where classified at good ecological status or better under the Water Framework Directive.

The Environment Agency has investigated the possible reasons for failure and found that diffuse pollution from agricultural sources account for 54% of the water bodies not achieving good status. Barriers to migratory fish account for 23%.

Our soils and nutrients

Our topography and the nature of our soils presents challenges for land management and water quality. Our rivers are monitored regularly to meet standards set out in the Water Framework Directive.

Non-compliance with objectives on all rivers is caused by nutrient enrichment affecting phosphate levels, algae and aquatic plants.

Parts of the River Axe are designated as a Site of Special Scientific Interest (SSSI) and Special Area of Conservation (SAC). At the moment the river is in an ‘Unfavourable Declining’ condition due to siltation and nutrient enrichment, which is affecting the plant and animal communities.

Salmon are particularly sensitive to sediment pollution that affects the quality of spawning habitat. The salmon population of the River Axe declined through the 1970s and 1980s to the extent where no salmon were recorded in the late 1980s and early 1990s. Most of the adult salmon returning to the Axe at present are probably derived from introduced hatchery-reared fish as part of rehabilitation work.

The East Devon Catchment Partnership, established in 2014 under the Catchment Based Approach programme, has the following objectives:

To deliver positive and sustained outcomes for the water environment by promoting a better understanding of the environment at a local level; and

To encourage local collaboration and more transparent decision-making when both planning and delivering activities to improve the water environment.

We will adopt this approach to promote a platform for engagement, discussion and decisions of much wider benefits; including tackling diffuse agricultural and urban pollution, and widespread, historical alterations to the natural form of channels.

Community events will be held to enable engagement and delivery with communities across the catchment.

The Partnership is hosted by Devon Wildlife Trust and
is made up of the following partners:

The Partnership has produced a range of reports and surveys on the key characteristics and environmental opportunities of the catchment, specific events, projects and activities.

An initial report detailing the context of our catchment and identifying opportunities for future work.

Our Action Plan outlines our key principles, goals, how we will engage and our priorities for delivery.

The plan also contains a summary of our priorities and actions/targets.

A wide range of projects and initiatives have been – and are being – delivered and developed through Catchment partners, from soils management to natural flood management. A selection of these projects and related findings are detailed in the reports/resources listed below.

A guide for land managers and advisors in Devon and Cornwall.

Runoff from maize can cause serious diffuse pollution and contribute to localised flooding.

The East Devon Diffuse Pollution project provided a ‘snapshot’ of the impact of maize growing in East Devon.

Hydrological Monitoring and End of Project Reports (2021) from the Ottery St Mary NFM Project;
working to reduce the risk of flooding to properties in Ottery St. Mary and benefit wildlife in the catchment.

This study focuses on the Northbrook, which rises in farmland above Exeter as the Mincinglake Stream
and flows for a total of 7.6km through Exeter before joining the River Exe.

Website links to projects operating within the East Devon Catchment:

This website uses cookies so that we can provide you with the best user experience possible. Cookie information is stored in your browser and performs functions such as recognising you when you return to our website and helping our team to understand which sections of the website you find most interesting and useful.

Strictly Necessary Cookie should be enabled at all times so that we can save your preferences for cookie settings.

If you disable this cookie, we will not be able to save your preferences. This means that every time you visit this website you will need to enable or disable cookies again.